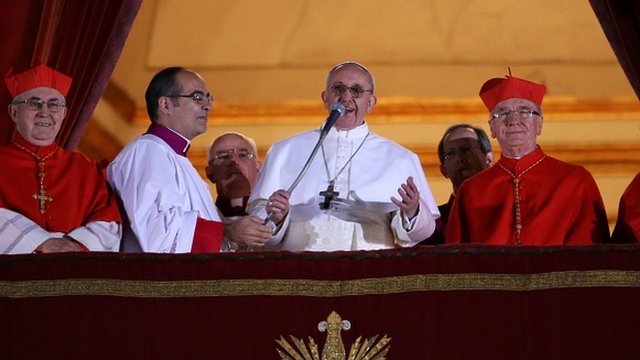 Appearing on a balcony over the square, he asked the faithful to pray for him. Cheers erupted as he gave a blessing.

The 76-year-old from Buenos Aires is the first Latin American and the first Jesuit to be pontiff.

He will be installed officially in an inauguration Mass on Tuesday 19 March, the Vatican said.

Pope Francis replaces Benedict XVI, who resigned last month at the age of 85, saying he was not strong enough to lead the Church.

He has telephoned Benedict and is planning to meet him, a Vatican spokesman said.

Pope Francis began his address to the crowds by offering a prayer for his predecessor.

In a light-hearted moment, he said his fellow cardinals had gone to the "ends of the Earth" to find a bishop of Rome.

He went on to ask the crowd to "pray to God so that he can bless me", before calling on the world to set off on a path of love and fraternity.

"Habemus Papam Franciscum," was the first tweet by the papal account @pontifex since Benedict stood down last month.

The election was met with thunderous applause at the cathedral in Buenos Aires, Pope Francis' home city.

Throughout Latin America, people reacted with delight and surprise.

"It's a huge gift for all of Latin America. We waited 20 centuries. It was worth the wait," said Jose Antonio Cruz, a Franciscan friar in the Puerto Rican capital San Juan, quoted by the Associated Press.

"Everyone from Canada down to Patagonia is going to feel blessed. This is an event."

US President Barack Obama sent "warm wishes" on behalf of the American people to the newly elected pontiff, hailing the Argentine as "the first pope from the Americas."

UK Prime Minister David Cameron said it was a "momentous day" for Catholics, while Archbishop of Canterbury Justin Welby, leader of the world's Anglicans, offered him "every blessing".

"I look forward to meeting Pope Francis, and to walking and working together to build on the consistent legacy of our predecessors," he said in a statement.

Correspondents say Cardinal Bergoglio was a surprise choice and not among a small group of frontrunners before the election.

Many observers were also expecting a younger pope to be elected.

He is regarded as a conservative, but is known for his humility. He has spent almost his entire career in Argentina and often travels to work by bus.

The BBC's Marcia Carmo in Buenos Aires says Cardinal Bergoglio's sermons always had an impact in Argentina: he often stressed social inclusion and indirectly criticised governments that did not pay attention to those on the margins of society.

The name he has taken is reminiscent of St Francis of Assisi, the 13th Century Italian reformer and patron saint of animals, who lived in poverty.

The saint was said to have been summoned by God to repair a Church in ruins.

Cardinal Bergoglio, whose family roots are Italian, is generally thought to have come second in the last conclave in 2005, which elected Benedict XVI as Pope.

The 115 cardinals involved in the 2013 election were in isolation since Tuesday afternoon, and held four inconclusive votes.

At least 77 of them, or two-thirds, would have had to vote for a single candidate for him to be elected Pope.

Before the conclave began, there appeared to be no clear choice to replace Benedict.