US actor Paul Walker, who starred in the Fast & Furious series of action films, has been killed in a car crash in California.

Walker, 40, was a passenger in a Porsche sports car driven by a friend – who also died – when it crashed north of Los Angeles.

Walker was said to be attending a charity event at the time.

He starred in all but one of the films in the Fast & Furious franchise, the sixth of which opened in May.

Walker also starred in the suspense drama Hours, a movie that is set for release this month.

The Los Angeles County Sheriff's department said the crash happened in the community of Valencia.

burned-out wreckage of a red Porsche

The red Porsche crashed into a lamp post in Valencia, north of Los Angeles
The sports car burst into flames after the crash

It said deputies found a car engulfed in flames when they responded to a report of a collision. Two people found in the car were pronounced dead at the scene.

"It is with a truly heavy heart that we must confirm that Paul Walker passed away today in a tragic car accident while attending a charity event for his organisation Reach Out Worldwide," the statement on the actor's Facebook page said.

Heaven has gained a new Angel. Rest in Peace”

"He was a passenger in a friend's car, in which both lost their lives. We… are stunned and saddened beyond belief by this news.''

"Paul was truly one of the most beloved and respected members of our studio family for 14 years, and this loss is devastating to us, to everyone involved with the Fast & Furious films, and to countless fans.

"We send our deepest and most sincere condolences to Paul's family."

The first film of the franchise was released in 2001 and the seventh is in development.

Walker was one of the leading protagonists, along with Vin Diesel and Michelle Rodriguez.

Diesel said in a post on Instagram: "Brother I will miss you very much. I am absolutely speechless. Heaven has gained a new Angel. Rest in Peace."

Another Fast & Furious star, the rapper Ludacris, wrote: "Your humble spirit was felt from the start, wherever you blessed your presence you always left a mark, we were like brothers."

Walker began acting as a young boy when his mother, a model, took him to auditions for commercials.

After drifting away from acting, he got his big break when a casting director remembered him from years before, tracked him down and gave him a role in the TV series Touched by an Angel.

Walker later won a recurring part in the soap The Young and the Restless before moving on to supporting roles in teen films in the late 1990s with Varsity Blues, She's All That and The Skulls.

After the success of the first Fast & Furious film, Walker became the leading man for the second instalment when Vin Diesel dropped out. 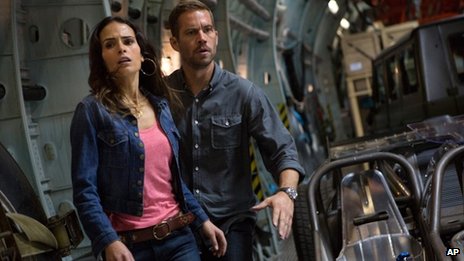 Diesel later returned, however, and the six-film franchise has earned an estimated $2.4bn (£1.5bn) at global box offices. The series has not lost its appeal, with the latest instalment, the sixth, the most lucrative so far.

The seventh instalment began filming in September but has not been completed. It had been scheduled for release in July.

Walker has also filmed Hurricane Katrina drama Hours, which is due to be released on 13 December.

Another forthcoming film is Brick Mansions, a remake of the French action film District B13, for film studio Relativity.