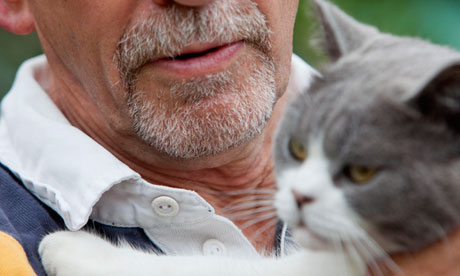 Peter Hughes (not his real name) is an older gay man living with HIV. Many fear they will end their lives alone. Photograph: Graham Turner for the Guardian

Getting an HIV diagnosis used to be a death sentence. In the 30 years since the virus was first identified, tens of millions across the world have died of HIV-related causes, often at a young age. But the development of new drugs since the mid-90s has transformed long-term survival rates. Now we are seeing what many never thought possible – a growing number of older people living with HIV.

One in five adults (16,550) treated for HIV in the UK in 2011 was aged 50 or over – compared with just one in nine (3,640) in 2002, according to Health Protection Agency (HPA) figures. Many have been living with the virus for years, but there are also increasing numbers who are acquiring it in later life.

"I am seeing 50-, 60-, 70- and 80-year-olds, some of whom recently acquired HIV," says Dr David Asboe, consultant in HIV medicine at Chelsea and Westminster hospital and chair of the British HIV Association. "People may think older people are not as susceptible to infection, and that's certainly not true. They might think that as they get older people don't participate in sexual activities that are risky, and that's not true."

Yet despite the growing numbers, older people with HIV feel particularly marginalised, according to Dana Rosenfeld, senior lecturer in sociology at Keele University and principal investigator for a major study published on Wednesday on HIV and later life. "HIV is associated, to the extent that anyone thinks about it at all, with younger people," she says. "The older population living with HIV feel invisible. Many feel there is nothing out there about them and nothing for them."

The two-year study, the biggest of its kind in the world, was run by a partnership between Keele and Westminster universities, Chelsea and Westminster, and Homerton university hospitals, South Kensington and Chelsea mental health centre, the HPA (now Public Health England), and treatment and advocacy organisation iBase. It was based on more than 100 interviews with people living with HIV aged from their 50s to their 80s and experts in the field. The project found that ageing with HIV brings a range of anxieties . Many felt there was a particular stigma attached to HIV because it somehow signalled "age-inappropriate promiscuity". "There's often a notion that they will be looked at as lesser beings – that there's something particularly undignified, particularly sullying or particularly inappropriate in later life," says Rosenfeld.

Many older people feel so ashamed of their HIV status that they are unable to tell their families, friends and neighbours. Those who don't have a partner often fear that they will end their lives alone. And then there is the uncertainty about their health. Rosenfeld likens the first generation ageing with HIV to the first men on the moon. "Any chronic illness is by definition uncertain – you have good days and bad days. But with HIV and ageing there's much more uncertainty," she says. "If you have a symptom, you don't know whether it's due to the normal ageing process or HIV. People wind up being hyper-aware of their bodies and hyper-anxious."

It is the range of uncertainties that can be so debilitating, fuelling high levels of depression among those who took part in the study, with the depression often getting worse the longer someone has been diagnosed.

"There is a danger in thinking now that we've got a pill and we can get the viral load down, the patient is going to be very well adjusted and happy," says Asboe. "That can be true but it often isn't."

Those working in the field would like to see more targeted information for the older age group about the risks of HIV and more tailored support available for those who already have a diagnosis. As a drive continues to move all but the most specialist aspects of healthcare for those living with HIV out of hospitals and into the community, Asboe says there needs to be a recognition that, for some, expert input will still be needed to tackle the psychological and social effects of living with HIV.

Rosenfeld says the particular needs of older people living with HIV must be acknowledged. "There are those who acquired HIV at 25 who never imagined a future at all. And then there are 50-year-olds or 60-year-olds with kids and grandkids who had imagined a certain future and had spent years planning for it and now all of a sudden everything is different. A lot have been very, very saddened – they are mourning the future they thought they would have. We owe them all a lot more attention. We need to prepare as people get older for their social needs and for their long-term care."

Winnie Sseruma: 'Many of us didn't think we would still be here'

"People have forgotten that those of us who got HIV many years ago are now getting older," says Winnie Sseruma. "Many of us didn't really think we would still be here."

Sseruma was just 27 when she was diagnosed with HIV 25 years ago while studying in the US. "It was really shocking, just devastating," she says. Born in the UK, but brought up in Uganda, she came back to the UK in 1994, where a combination of the new medication, peer support and counselling transformed her outlook, allowing her to "live the life that I thought I would never have a chance to live". Although Sseruma, 52, has a strong support network where she lives in London and is currently dating, her advocacy for the HIV community has brought her into contact with many who are not as lucky. "The stigma is still very real for many people here in the UK," she says. "Some people even with the treatment hide away and never really recover their confidence and self-esteem.

"We have to continue to advocate to make sure that health systems are geared up to be able to treat older people living with HIV and to make sure people don't continue to be stigmatised. There's still a massive challenge. HIV has not gone away."

"Unbelievably awful" is how Alice Welbourn describes the day, 21 years ago, when she was told she had acquired HIV. Pregnant with her third child, a positive diagnosis back then meant she was told that she or her unborn baby might die if the pregnancy continued. So Welbourn and her partner took the devastating decision to have a medical termination. Grief-stricken, she considered throwing herself under a bus. Her life-saver, she recalls now, was a peer support group for women run by an ex-prisoner who had had her own diagnosis delivered through a hatch in her cell door by a prison officer. "I thought, 'What right have I, with a loving partner, children and fantastic healthcare, to contemplate killing myself when this fantastic woman who has gone through so much is helping us?'" she says.

In the years since, Welbourn, now 55, and living in Exeter, in Devon, has been a tireless campaigner, launching the Sophia Forum for women living with HIV and the Salamander Trust, which provides advocacy, training and research for people affected by HIV worldwide.

Like the other case studies here, Welbourn was not interviewed for the new study, but says she can understand the concerns it reveals. Many people, she says, still experience that "incredible depth of despair" she once felt, but can't tell anyone for fear of rejection. Her hope is for a better understanding that the virus "is only a bug".

"People can share about cancer and diabetes," Welbourn says, "but with HIV there's this huge fear that feeds off all those judgments and morality and injustice."

Peter Hughes, 69, has lived the HIV story from its very beginnings. One of the first to be tested in the UK, he was given a positive diagnosis back in 1984. In those early days, he recalls visiting a hospital where health staff in spacesuit-style protective clothing were passing a patient's food under the door. "We were treated like lepers," he says.

Three decades on, the stigma hasn't entirely gone away and Hughes (not his real name) did not want to be identified for this article for fear of potentially negative reactions and homophobia – he is a gay man – in the town in the home counties where he now lives.

Hughes has the support of his partner, family and close neighbours. But he worries that others may be more isolated as they age, particularly now that the HIV community is very different from the one he campaigned in for many years.

"Up until the antiretroviral drugs came in, there was a huge family and we supported each other to get through this," Hughes says. "What happens today is everyone goes to the clinic as if they are going to the petrol station, fills up with their medication and goes out. They don't talk to people."

He was told he had 10 months to live when he was diagnosed. Survival against the odds brings a mix of emotions. "It's fantastic but you do think 'Why me?' and you do tend to get very grumpy that, in some ways, the non medical care is not as good as it was."