The Rolling Stones have left Australia, with the group’s private plane departing Perth Airport at 2.55pm, with Mick Jagger and his fellow bandmates on board.

A grim-faced Mick Jagger, wearing dark sunglasses and black cap, was dropped at the plane’s boarding steps as he prepares for his journey home. Pilots lodged a flight plan at Perth airport listing Abu Dhabi as the first destination.

Meanwhile it has been revealed that members of Rolling Stones referred to the late L’Wren Scott as the band’s ‘Yoko Ono’. 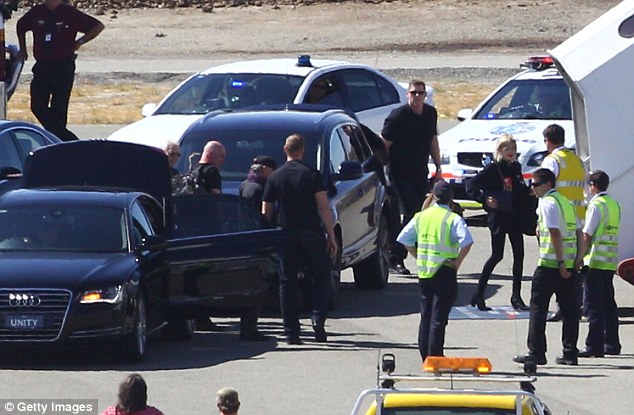 The 49-year-old fashion designer was allegedly compared to the widow of John Lennon, who has often been blamed for the breakup of The Beatles.

‘The rest of the band didn’t like L’Wren because she was so controlling,’ a source told Page Six.

‘When they saw her, they said, “Here comes Yoko”.’

Ms Scott had also wanted to design the tour outfits for the band, but they rejected her offer and she only designed for Mick, the source said.

The Rolling Stones left Perth’s Hyatt Regency at 2pm on Thursday, filing into five separate cars in a military-style  motorcade.

Police closed roads while detectives and uniformed police – some wearing bullet-proof vests – escorted the band to Perth airport. Each of the five cars had heavily tinted glass, along with rear-window curtains.

The band left Australia only a few hours after a New York medical examiner ruled that the death of Ms Scott was a suicide. Police confirmed she did not leave a note,

Today, Frontier Touring has confirmed it is working on new dates for the Rolling Stones’ Australian tour. Concert promoters said the band’s shows may be held after the football season in either October or November, News.com.au reported.

On Wednesday night, the same night the Rolling Stones were due to perform in front of more than 15,000 screaming fans for the first show of their sold-out tour, drummer Charlie Watts played to just 130 people at the city’s tiny Ellwood Jazz Club.

The club was closed to the public when Watts performed, but jazz fans already inside were treated to the surprise 45-minute performance from the Rolling Stones drummer.

Club director Graham Wood told MailOnline that the 72-year-old drummer was ‘private and quiet’ during his two hours at the club. But he said Watts came alive when he walked onto the stage, even treating fans to a jazz-style version of Rolling Stones’ mega-hit Honky Tonk Woman.