Ukrainian government forces fought gun battles Monday with pro-Russian milititants in the separatist-controlled eastern Ukrainian city of Slovyansk, a day after pro-Russian protesters stormed the police station in the southern city of Odessa.

Six people have been killed and around 100 wounded, said a Ukraine Security Service spokeswoman. Russia's Interfax news agency quoted a separatist source in Slovyansk as saying that 20 or more pro-Russian militants had been killed in the fighting.

Also, a Ukrainian military helicopter was shot down near Slovyansk on Monday, but the pilots survived, Ukraine’s Defense Ministry said.

The helicopter, which came under fire from a heavy machine gun, crashed into a river. The ministry said in a statement the crew were evacuated to a nearby camp but did not give any detail of their condition.

At least three other helicopters have been shot down by pro-Russian rebels in recent weeks. 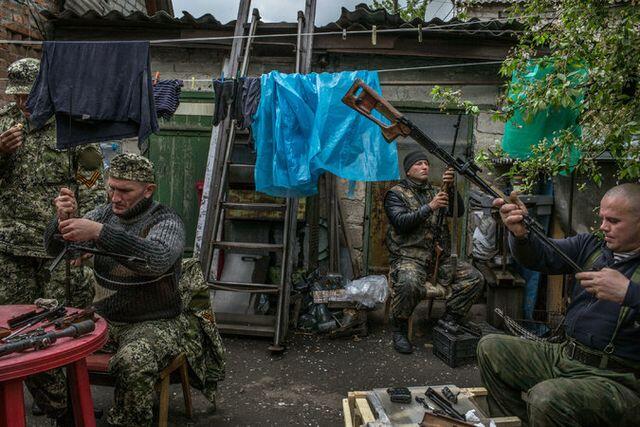 Meanwhile, Russia has called on the Kyiv government on Monday to stop using armed force against its people and enter talks aimed at resolving the Ukraine crisis.

The Foreign Ministry said in a statement that a humanitarian crisis was looming in blockaded towns in eastern Ukraine, where Ukrainian forces have been trying to dislodge pro-Russian separatists who have occupied official buildings.

It called on the Kyiv authorities “to come to their senses, stop the bloodshed, withdraw forces and finally sit down at the negotiating table to begin a normal dialogue about ways to resolve the political crisis.”

Ukraine and the West blame Russia for the violence, accusing it of direct involvement in an effort to destabilize Ukraine, a charge Moscow denies.

On Sunday in Odessa, hundreds of pro-Russian militants used a battering ram on one entrance to the police station before pushing their way in through a garage. Authorities freed more nearly 70 of the 150 people arrested two days earlier during clashes that led to a fire which killed 42 mostly pro-Russian activists.

Ukraine's prime minister, Arseniy Yatsenyuk, visited the port city Sunday, declaring Russia is seeking to destroy Ukraine by engineering clashes in eastern Ukraine and now Odessa.  He accused Moscow of engaging in a "well-planned provocation" against the interim Kyiv government.

Ukraine says it will continue pressing its military offensive against pro-Russian separatists in eastern Ukraine, while the Kremlin reported receiving thousands of calls for help from the region's Russian-speaking citizenry.

Ukraine's acting Interior Minister Arsen Avakov said Sunday that troops had recaptured a television tower and government buildings from rebels in Kramatorsk, a town near Slovyansk.

Ukraine's National Security and Defense Council chief Andriy Parubiy said Sunday an anti-terrorist operation will be carried out in towns beyond Slovyansk and Kramatorsk.

In Moscow, Kremlin spokesman Dmitri Peskov said Russian President Vladimir Putin had not yet decided how to respond to the offensive, or to the deaths in Odessa.

Russia has at least 40,000 troops and armor massed on its border with Ukraine, and the Kremlin says it reserves the right to enter the country to protect ethnic Russians.

Russia has suspended a 2001 agreement on mutual military inspections with Lithuania, the defense ministry said on Monday, amid growing worries in the Baltic region over Moscow's assertiveness in Ukraine.

Under their agreement, Lithuania could inspect forces in Kaliningrad, a Russian exclave between Lithuania and Poland that is the headquarters of the Russian Baltic fleet, while Russia could do likewise with the Lithuanian military.

The three Baltic states of Estonia, Latvia and Lithuania, all former Soviet republics with small military forces, have been warily watching Russia reasserting itself in its former dominions further south.

A total of 600 U.S. troops have now been deployed to Poland and the Baltics for infantry exercises, where they are expected to remain on rotation until the end of the year. Last week, four British Royal Air Force Typhoon fighter jets also arrived in Lithuania, the first of 12 fighters that will boost air patrols in the Baltics.

Russian President Vladimir Putin signed a law on Monday making the denial of Nazi crimes and distortion of the Soviet Union's role in World War II a criminal offense punishable by up to five years in jail.

The law, described by critics as an attempt to curb freedom of expression to appease conservative Russians, Putin's main support base, also criminalizes the desecration of war memorials.

The Kremlin has used World War II as a pillar to unite a society that Putin has said lost its moral bearings following the 1991 Soviet collapse.

Russian officials and media have raised the specter of Nazi Germany repeatedly during Moscow's confrontation with the West over Ukraine, calling the overthrow of Russia-allied president Viktor Yanukovych in February a coup carried out in part by “neo-Nazi” forces.

European Union officials gathered behind closed doors on Monday to confront the hard choices to be made for the EU to wean itself off Russian gas, even considering more use of polluting coal.

A copy of the agenda for Monday's three-hour talks on energy security, according to Reuters listed debate on options such as increased use shale gas, better storage and a drive to reduce demand.

One of the technical experts attending the meeting said on condition of anonymity that discussion had focused on the need for other fuels, even coal, which is far more polluting than gas, and improved energy efficiency “as part of a bundle of measures.”

Russia provides around a third of EU gas imports, roughly half of which is piped via Ukraine. On average, Russia gets $5 billion per month in revenue from gas exports to the EU.

Some reporting by Reuters