The actress (and dancer) has moved on to bigger projects since, earning an NAACP Award nomination for her role in ‘Ma Rainey’s Black Bottom,’ and she’s also starring in two upcoming buzzed-about films, ‘Boogie’ and ‘Zola’ (based on that viral Twitter thread about a stripper road trip that went all the way wrong). She’s also made some incredible strides in her love life after making a pretty dramatic first impression on Jesse Williams back in September 2018 at his Emmys party. The couple tells the story in a GQ feature that’s part of their March Modern Love issue.

“I was in the middle of a conversation with a very close friend, and she walked by,” Jesse recalls. “Everything got quiet. I stopped that conversation and said, ‘I’ll be right back.’ I just zoomed in on her. The rest of the night, we were this close to each other, talking, laughing, dancing, and ended up together in conversation until six in the morning.”

“Little did he know,” Paige reveals dramatically, “I had spotted him first.”

Strangely enough, Taylour says she had a little more foresight about what was coming for them because she had visited a healer during a time when she felt everything was falling apart in her life. According to GQ, frequent visits to said healer predicted better times ahead, including a mysterious “J” figure, who she described as an older man in the same industry who would approach her in a dark, crowded space. After a few months went by, Paige says:

“I had a dream that I was sleeping next to him.” Williams clarifies: “The night before we met.” When she went to the Emmys party, in a borrowed red dress, and Williams finally arrived, a calm washed over Paige: “It was just like, ‘There he is.’ Almost like, ‘Where have you been?’ ”

Okay, we get it. They finish each other’s sentences and isht. But the couple actually claims they couldn’t be more different and their success as a couple is proof positive that opposites do attract.

“Jesse can be very literal—facts, facts, facts,” Paige says. “We came from very different worlds,” Williams explains. “She’s very feminine and into spiritual planes, astrology. I’m very practical, fact-based, and masculine.” Still, after a certain point, Williams realized he had to loosen his grip a little. “I was having a wild, unfamiliar, uncomfortable experience, because it was all just happening in a very spiritual way—a way that’s not how I usually arrange things in my life. But I’d been going through a lot of transitions in life, and I had deliberately positioned myself to be open to saying yes, to be available to whatever, more than I had in the past,” he continues. “I don’t often let things happen to me. But because I had decided I was going to be open, I didn’t pull the brake like I normally would. I didn’t try to control, or position, or take a breath, and I just went along for the ride, as scary as that was and has been. She blew in—” “Like a wrecking ball,” Paige finishes, belting out the Miley Cyrus lyric. 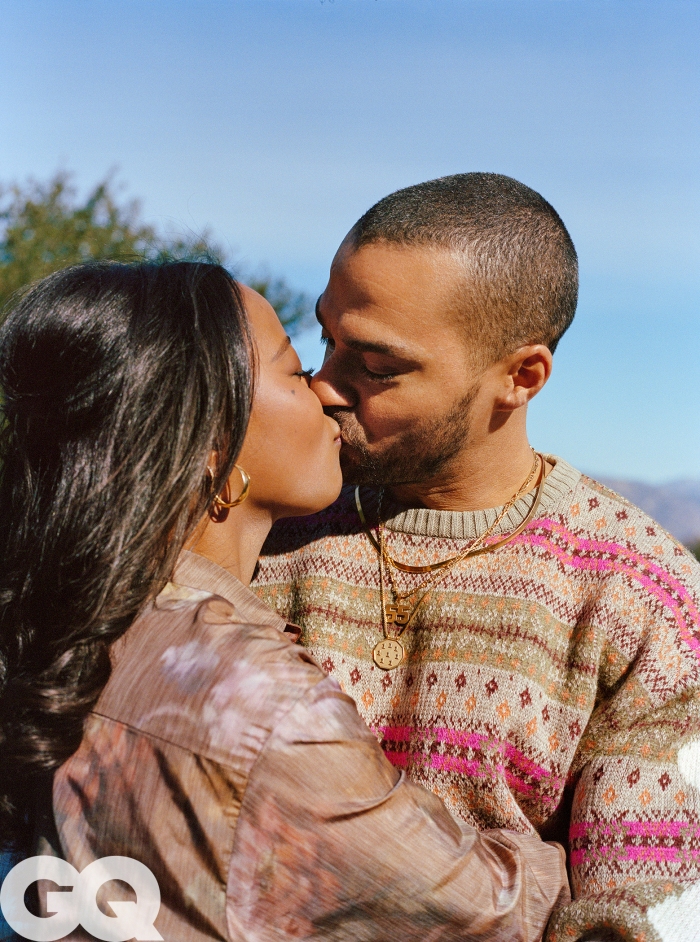 Most of us probably didn’t even realize Williams and Paige had been dating so long. After all, remember the Minka Kelly and Taylor Rooks rumors? Granted both of those rumors were months before he met Taylour — but still, those experiences seem to be part of why Jesse Williams was intent on keeping their relationship under wraps at first.