South Sudan’s military says it has recaptured the strategic town of Bor from rebel forces.

The Ugandan army said it had helped in the operation, while a spokesman for the rebel forces said its troops had made a tactical withdrawal.

Bor, the capital of Jonglei state, has changed hands several times in a month-long conflict that is believed to have left thousands dead.

Meanwhile, talks to try to find a ceasefire are continuing in Ethiopia.

The conflict between rebel and government forces broke out on 15 December. President Salva Kiir has accused his former deputy Riek Machar of plotting a coup – an accusation he denies.

The dispute has seen killings along ethnic lines – Mr Kiir is a member of the Dinka community, the country’s largest, while Mr Machar is from the Nuer ethnic group. 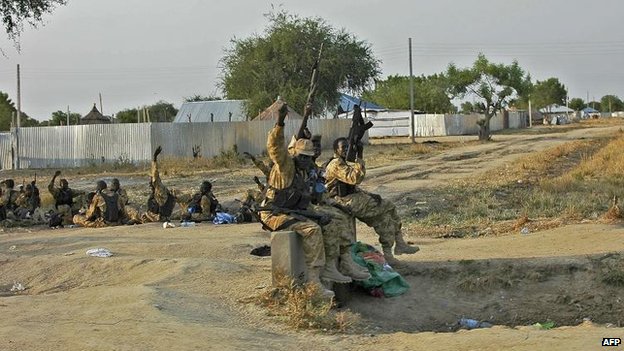 Hundreds of thousands of people have been displaced by the fighting.

On Thursday, Ugandan President Yoweri Museveni confirmed his country’s troops were now fighting alongside South Sudanese government forces against the rebels. A spokesman for the Ugandan People’s Defence Force said its troops had helped retake Bor.

“There was a lot of resistance but our force was overwhelming,” the spokesman, Paddy Ankunda, told Reuters news agency.

Brig-Gen Lul Ruai Koang, a military spokesperson for the opposition in South Sudan, said its troops had withdrawn to reorganise.

He said Bor was a “ghost town” and no longer important.