Macron visits Africa amid anger over human trafficking and slavery

The French president, Emmanuel Macron, will start a four-day visit to Africa on Monday amid growing anger across the continent about politicians’ collective failure to do more to clamp down on human trafficking, and even slave auctions, in Libya.

The revelations by CNN of apparent slave auctions in Libya a fortnight ago led to widespread condemnation, but also claims that European politicians had been repeatedly warned about the dire state of Libyan migrant detention centres, including systematic abuse, amounting to slavery.

Macron has called for an emergency meeting of the United Nations security council this week, saying such auction houses are a crime against humanity. The fierceness of his intervention may have been prompted by his high-profile visit to sub-Saharan Africa built around a carefully crafted theme of empowering Africa’s youth.

The contrast between empowerment and the reality of slavery in Libya has set alarm bells ringing in the Elysée, especially since critics say France, by backing the ousting of Muammar Gaddafi in 2011, has a key responsibility for Libya’s current state of near-anarchy.

Macron’s Africa visit, starting with a speech to young Africans in Ouagadougou, Burkina Faso, culminates in an appearance at the EU-Africa Union (AU) summit to be held on Wednesday and Thursday in Abidjan, Ivory Coast.

Burkina Faso withdrew its ambassador from Libya in protest at the revelations in the CNN documentary. The revival of slavery, already billed as “the humiliation of Africa”, is likely to top the AU’s agenda. The AU’s human rights arm has already been asked to conduct an inquiry. 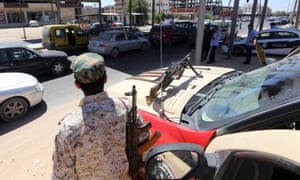 Members of a Libyan force tackling clandestine migration at a checkpoint in Sabrata, west of the capital Tripoli. Photograph: Mahmud Turkia/AFP/Getty Images

The UN-backed Libyan Government of National Accord has also promised a rapid inquiry in which it has vowed anyone found guilty will not be treated with leniency. Appealing for Libyans to co-operate with the government’s attorney general, the GNA insisted it is the victim of illegal immigration, and not a source of it.

Across Africa, Libyan ambassadors have been forced on to the back foot as angry Africans have protested outside their embassies.

The fear is that Libya’s image as a chaotic transit state for tens of thousands of migrants seeking to reach Europe will shift to a country in which racism is still prevalent and too many have been willing to turn a blind eye to profitable exploitation. Black music and football stars have expressed their outrage at the revelations, including Ivorian reggae singers Alpha Blondy and Tiken Jah Fakoly, as well as footballer Didier Drogba. Paul Pogba, the Manchester United footballer, made a ”shackles” gesture following his goal against Newcastle at the weekend.

There have also been street protests in Paris, Belgium and London. In Libya itself, Arabs have taken to social media to show their solidarity with black migrants.

In one of the most extraordinary responses, the Rwandan foreign ministry offered to provide asylum to 30,000 mainly sub-Saharan Africans trapped in Libya. “Given our own history … we cannot remain silent when human beings are being mistreated and auctioned off like cattle,” the foreign ministry said. During Rwanda’s 1994 genocide, 800,000 ethnic Tutsis and moderate Hutu were massacred in 100 days while most countries did little to help. 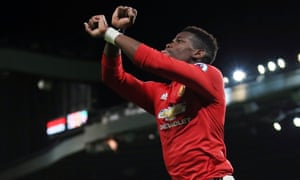 At one level the outrage is surprising, if only because the existence of state and militia migrant detention centres, enforced labour and open slave auction markets was known and documented. The UN’s own international organisation for migration produced a major report in May, covered in the Guardian, effectively documenting slavery’s existence, a point the IOM reminded the world in response to the outrage sparked by the CNN’s footage. The Italian interior minister, Marco Minniti, has been pressing charities to oversee the detention centres, but the NGOs are reluctant to do so due to the lack of security, and fear they will be seen as an arm of the Libyan state.

As many as 400,000 migrants are said to be trapped in Libya, but the number is rising as the EU-backed Libyan coastguard takes an ever harsher line with smugglers, leaving more of them trying to raise funds either to return home or make the risky Mediterranean crossing. Over the weekend, 31 migrants drowned, and hundreds more forced back by the coastguard.

The outrage has also played into a pre-existing frustration with both the Libyan judicial system, and in particular the inability of the international criminal court Libyan prosecutor Fatou Bensouda to bring anyone to the ICC. Critics say the ICC focuses overmuch on former figures in the regime of Col Gaddafi, rather than more contemporary war crimes.

Speaking at a briefing to the UN security council a week ago, Ghassan Salame, the UN’s special envoy to Libya, said: “I cannot ignore that such events take place across the country with alarming regularity, and I cannot accept that repeated calls for justice go unattended. If Libyans alone cannot combat impunity for war crimes, it is time for the international community to consider mechanisms that can help them do so; possibly including joint tribunals. We cannot stand idly by on modern slavery, rape, forced labor and murder.”