Basketball legend Michael Jordan on Sunday sent his condolences to the family of George Floyd and shared his support for protesters fighting for justice.

“I am deeply saddened, truly pained and plain angry. I see and feel everyone’s pain, outrage and frustration,” Jordan, who owns the Charlotte Hornets, said in his statement, which was posted on the Jordan brand’s social media accounts as well as the Hornets’ Twitter account. 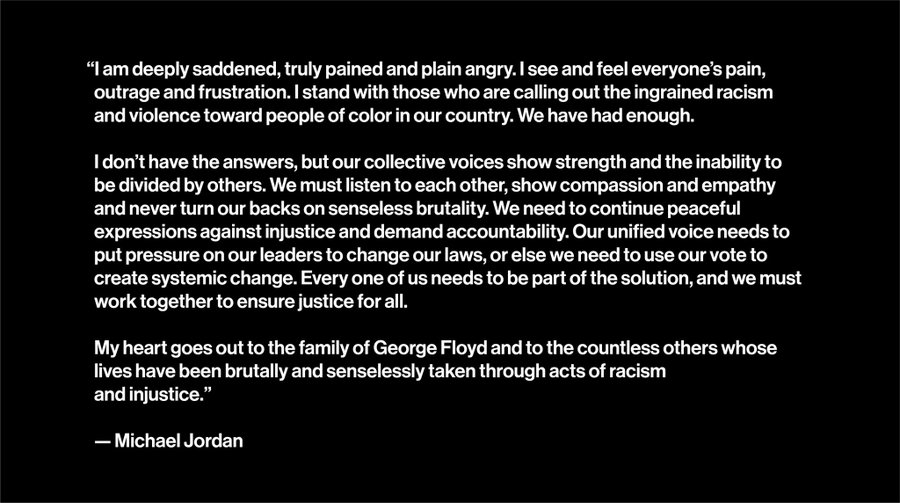 His statement comes amid nationwide protests sparked by the death of Floyd, a 46-year-old unarmed black man who died last week at the hands of a police officer in Minneapolis, Minnesota.
Former police officer Derek Chauvin was fired after video footage showed him with his knee on Floyd’s neck for 8 minutes, 46 seconds in total. He was charged Friday with third-degree murder and second-degree manslaughter.
“We must listen to each other, show compassion and empathy and never turn our backs on senseless brutality,” Jordan, 57, said. “We need to continue peaceful expressions against injustice and demand accountability.”
Jordan said he believes everyone needs to work together to “ensure justice for all.”
“Our unified voice needs to put pressure on our leaders to change our laws, or else we need to use our vote to create systemic change.”

NBA teams issue their own statements

A number of National Basketball Association teams have also issued statements regarding the death of Floyd.
“We condemn racism, bigotry, violence and prejudice in all its forms,” the Los Angeles Lakers said in a tweet Saturday. “Everyone has the right to live free from fear and to be treated with dignity and respect. We hear the pain of our Black community and we will not stay silent.”
Doc Rivers, coach for the Los Angeles Clippers Clippers, recalled his own instances of racist interactions, saying that he’s been “called more racial slurs that I can count, been pulled over many times because of the color of my skin, and even had my home burned down.”
“Our society must start getting comfortable with the uncomfortable conversation and do the right thing,” Rivers said in a statement posted to Twitter. “Silence and inactivity are not acceptable anymore.”

Kareem Abdul-Jabbar defends protests and says racism is deadlier than Covid-19 in powerful op-ed In a joint statement, the Brooklyn Nets, Long Island Nets, New York Liberty and Barclays Center called for a “peaceful response in our joint fight against racism.”

“This is not the time to be vengeful. this is a time to effect change,” the joint statement posted to Twitter said.
The Milwaukee Bucks said in a statement that the team is “distraught and angered” by Floyd’s death, “but we know this is not an isolated case.”
“As an organization, we remain deeply committed to address issues of social injustice and to make meaningful change for African-Americans and all marginalized members of our community.”