After 5 months of silence, South African Olympic and Paralympic track star, Oscar Pistorius has returned to Twitter and he’s been posting tweets on forgiveness, love & prayer.
This is coming after his spokeswoman revealed today that Oscar Pistorius was involved in a brawl at a nightclub over the weekend which has now focused fresh attention on the athlete’s character.
Pistorius had an altercation with businessman Jared Mortimer in a South African nightclub after Mortimer supposedly “aggressively interrogated” Pistorius about his murder trial, which has
attracted huge domestic and international attention. Witnesses to the brawl say Oscar Pistorius was “drunk and aggressive” when he got into the fight but his spokesperson says Mortimer was the aggressor. That Pistorius left the club soon after and now “regrets the decision to go into a public place and thereby inviting unwelcome attention. His tweets continue below.
Oscar’s murder trial was adjourned until August 7 to allow the legal teams prepare closing arguments. He faces life in prison if convicted of murder. 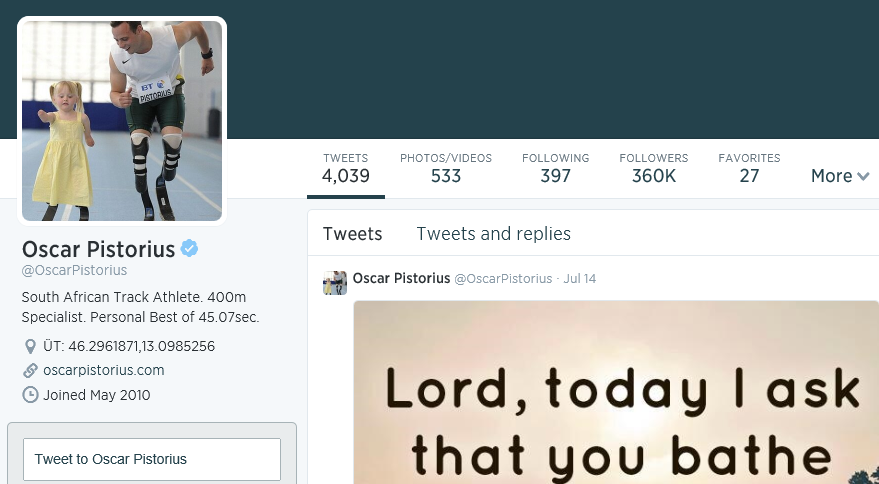 The Promota Magazine
← Previous Story Khloe Kardashian: ‘Lamar cheated with another woman on my birthday, and I lied to cover for him’
Next Story → Beyoncé shares new family photos