Piers Morgan has revealed he’s been sent ‘death threats’ after a petition was launched to get him fired from Good Morning Britain.

It’s fair to say Morgan isn’t one to shy away from controversy but in recent weeks a petition to have him removed from his job on ITV has almost 60,000 signatures. 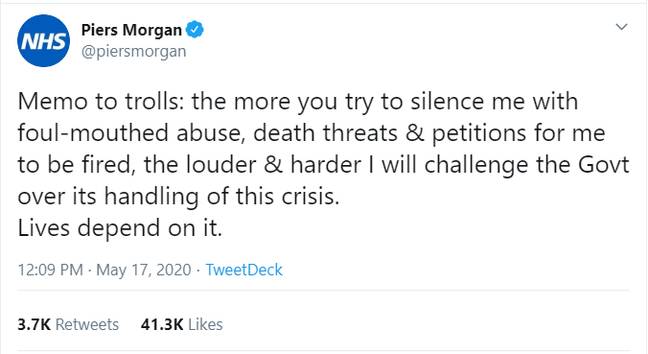 Morgan has divided opinions with his treatment of politicians during the coronavirus pandemic. His interviews with care minister Helen Whately and health secretary Matt Hancock received thousands of complaints to Ofcom.

However, Morgan has defiantly vowed to continue holding politicians to account over their handling of the coronavirus pandemic, taking to Twitter to say: “Memo to trolls: the more you try to silence me with foul-mouthed abuse, death threats and petitions for me to be fired, the louder and harder I will challenge the Govt over its handling of this crisis. Lives depend on it.”

Fans of the outspoken host were quick to throw their support behind him, with one person writing: “Piers, you are a legend! To some perhaps Marmite. I am a London bus driver and we all truly believe without you in our corner we could lose more friends and colleagues. Keep doing what you are doing. We salute you.”

While another wrote: “Not very often I agree with you Piers, but I have to say that you are the only one who is trying to hold the government to account. Facts matter when lives are at stake!”

Morgan has also hit out at the government over what he believes to be a ‘boycott’ of Good Morning Britain by politicians.

He tweeted yesterday to say: “The Govt has refused to put any minister up for interview on GMB tomorrow. This will be the 20th day of its boycott of our show during the worst national crisis since WW2. All because we asked them tough questions. We’ll keep asking them.”

The petition that is currently gaining signatures, however, wasn’t actually set up in response to the GMB host’s reports on the coronavirus pandemic – it’s seven months old and accuses ITV of ‘actively choosing to promote an insidious agenda against transgender people’, calling Morgan ‘one of our country’s most heinous public figures’.

But Morgan may be heartened to know that a second petition set up last month, entitled ‘Keep Piers Morgan on GMB for his common sense approach to life‘, currently has around 200 more signatures than the one to get him sacked.

The Promota
← Previous Story Boris Johnson: Coronavirus vaccine ‘might not come to fruition’
Next Story → UK coronavirus tests advised for people who lose taste or smell