Queen Latifah was a young rapper just beginning to dabble in acting when she was first approached about the possibility of playing the lead in a film about singer Bessie Smith. It’s taken 22 years, more than half the 43 years that Smith lived, for “Bessie,” premiering Saturday on HBO, to come to fruition. Rather than take a cradle-to-grave approach to Smith’s story, writer-director Dee Rees (“Pariah”) focuses on the relationship between the hard-drinking, bisexual Empress of the Blues and her mentor Ma Rainey, played by Mo’Nique. The filmmaker and her leading ladies recently gathered to discuss the long-gestating project.

What did you know about Bessie Smith and Ma Rainey before you got involved with this movie? 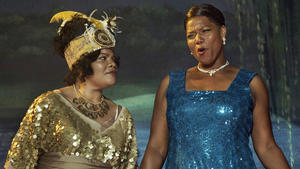 Queen Latifah: I didn’t know who Bessie Smith was, so when I played the music I said,” Oh, wow, this is different.” But I found Bessie through the project. I discovered she definitely went there much more than what we were able to do in the movie. If she got high, she got way high; if she got drunk, she got way drunk; she had sex, she had much sex, you know what I mean?

Dee Rees: For me, I had only known about Bessie Smith through my grandmother, she had one of the old Columbia compilation albums. My mom would play that for us downstairs, we had the hi-fi and 8-track player. So for me, it was about reconnecting with my mother and grandmother.

Mo’Nique: I had no idea who Ma Rainey was. When I read the script, I felt like Dee Rees was there with those women, like they sat down with her and said, “Let me tell you my story.” I think what appealed to me mainly was the friendship between these two women. It was just this beautiful sisterhood, and it never dissolved.

Rees, how did you reshape the project when you came on board as writer-director?

What kind of research did you do?

Rees: I didn’t want somebody else’s take. I really wanted to let Bessie speak for herself, so I started with her songbook. Everything about these women was written in the third person, and my whole thing was getting it in the first person. I was definitely not interested in a white man’s perspective on Bessie. I wanted to hear it from Bessie’s lyrics and Ma’s lyrics who they were. And Angela Davis’ book, “Blues Legacies and Black Feminism,” that was like my bible.

Mo’Nique: There’s really not information on Ma Rainey at all. So I asked her before every scene: “Sister, give me the story that you need to be told.”

This project arrives at a time when there’s a lot of talk about race, gender and Hollywood. Do you think things have changed since Bessie and Ma’s time?

Rees: I feel like artistically these women had more control over their images and their finances than women today. When Lars Von Trier makes a film, they don’t compare him to Wes Anderson. But a black woman makes a film, they got to pull the other black woman and say, “Let’s compare you two.” It’s like with Bessie and [her contemporary] Ethel Waters. You’re not allowed to exist separately as artists. That has not changed.

It is striking how open Bessie and Ma are in the film about their sexuality.

Rees: They’re living in a time of Jim Crow. The two things you can choose are who you love and where you go. These women chose both of those. Because of their wealth and status, they probably had a cushion around them. But the fact that they have lyrics about gay and lesbian people, that’s what they were seeing. I just wanted to be matter of fact about it, not make it scandalized or sensationalized.

Mo’Nique: What I really dug about Ma Rainey, she was unapologetic about it. She didn’t care who was looking, though it was back in the ’20s. Today we’re still hiding, we’re still very afraid to live in our truth. What impresses me about Ma Rainey too, she didn’t die broke. You see all that land that woman had? She died a wealthy woman. To show that story and not the normal stories that we see, where we die broke, alone, miserable. … I felt such a connection with this smart businesswoman and her fight for wage equality. I felt like she was saying, “Mo’nique, keep going.”

Rees: I also love that they built their wealth themselves. Columbia [Records] didn’t make them. They made their money on tours, the records were just like gravy. I feel like artists today are probably more exploited in their work. Now a studio makes you, a record company makes you. It’s like intellectual sharecropping.

Can you talk about the decision not to depict Bessie’s death?

Rees: I wanted to give Bessie the win. Most people, the thing they know is the car crash and the death. I wanted to show that she was growing until the very end, she wasn’t stagnant, she’s not this tragic figure. She’s a heroine. She won.

Latifah: That was a little difficult for me. [Dee and I] talked about it. There’s such a controversy over how she met her demise. Part of me wanted to have a little bit of the “Oh, no!” Maybe that’s me hanging out in Paris too much — I want that French ending. [Laughs.]

Latifah, how was it doing a nude scene for the first time?

I was actually very comfortable naked. [Pointing to her waist] These Spanx are tight. I’d take all of this off if I could! That scene was a day off for me. It was quiet, it was peaceful, it was intimate. I did a lot more work in other scenes than I did in that one.

Latifah and Mo’Nique, did life imitate art for you at all?

Mo’Nique: There’s one scene, I get chicken skin talking about it. Dee said “cut,” and we both had to look at each other and say, “Are you good?” We had to be still for a second because these women had come into that room and taken over to remind us of what we’re missing today. It was special from “Go.” It was an honor to be able to play with you [to Queen].

Latifah: Why did this movie take so long to happen? Well, it’s because we were waiting for Mo’Nique.

The Promota Magazine
← Previous Story Video: 50 Cent Gives One of His Most Revealing Interviews on How He Went From the Streets to the Mega Success That He Is Today
Next Story → ANGÉLIQUE KIDJO RECEIVES HONORARY DOCTOR OF MUSIC DEGREE FROM YALE