Dakar (AFP) – Senegal’s former president Abdoulaye Wade was due to make a controversial homecoming Wednesday after two years abroad — but his plane was severely delayed, with supporters claiming foul play by his political rivals.

Wade, who held power from 2000 to 2012, was expected in Dakar in the afternoon for his first trip back to the west African nation since he moved to France after a bitter defeat to arch rival and current leader Macky Sall.

But he still hadn’t touched down by early evening and aides accused the Senegalese government of ensuring his flight was grounded in Morocco so that he wouldn’t arrive until after dark.

“Wade is stuck in Morocco. The authorities don’t want him to arrive in broad daylight,” his spokesman Serigne Mbacke Ndiaye told AFP.

No government official was immediately available to comment on the claim but a Moroccan aviation source said Wade’s plane had been grounded in Casablanca and was waiting for an “indispensible” green light from Senegal to continue to Dakar. 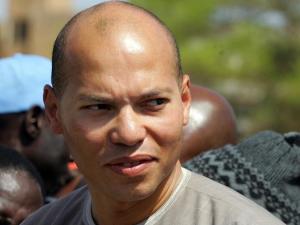 During Wade’s absence, the country’s new authorities have gone after his son Karim, accusing him of using corrupt means to acquire a fortune of 117 billion CFA francs (178 million euros, $246 million) when he was a so-called “super minister” in his father’s cabinet.

Karim Wade, 45, whose wealth includes land in Dakar, a fleet of luxury cars and media and finance companies operating across Africa, has been on remand in Dakar for a year and is due to be tried in June.

The elder Wade, who has been living in self-imposed exile in the French town of Versailles, has scrapped several planned homecomings in the past.

A deeply divisive figure, his attempt to extend his mandate in 2012 sparked widespread unrest across Senegal, with violent and at times deadly demonstrations in Dakar plaguing the run-up to the election.

“Wade is a father. He has a duty to come and back his son,” the retired statesman’s spokesman told AFP. 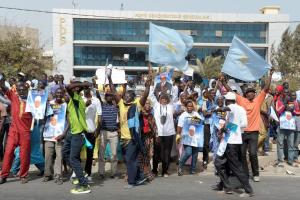 He added that, as secretary general of the Senegalese Democratic Party (PDS), which is due to contest upcoming local elections, Wade was obliged to return in a show of support for its candidates.

The former head of state had been expected to begin a PR offensive in support of his son soon after his arrival, with a party meeting he has vowed to hold despite it being banned over fears it will spark public disorder.

“We’re not changing our plans. We’re going to the meeting. Hopefully everyone will come to the meeting,” Wade told radio station RTI before boarding his plane for Dakar, adding that he had no intention to “destabilise” Senegal.

PDS supporters gathered along the main route from central Dakar to the airport and the few party officials who had been granted access to the building itself waited outside the main terminal.

Wade’s spokesman said he didn’t know how late the flight, originally expected in at 2:00 pm (1400 GMT), would now be.

In an interview on Monday with French daily newspaper Le Monde, Wade said his successor’s government was waging a “witch hunt” against him and his allies.

“Macky Sall has used the idea of battling corruption to fight Karim, to convict him, to take away his civil rights so he won’t stand in 2017,” said the former president.

Senegal is due to hold local elections on June 29, with the PDS wounded by its leader’s exit, despite still holding a majority of the west African country’s regions.

“The PDS has been weakened by the absence of a leader capable of uniting everyone, even if it remains the majority party,” Wade told Le Monde.

“I’m past being of an age where political ambition is important to me. I’m no longer interested in running for a position of power in Senegal, but that doesn’t mean I’ve quit politics.”

Seydou Gueye, a spokesman for Sall’s Alliance for the Republic, told a local radio station that “we would have liked to welcome him as a former head of state (but) he has decided to opt for a political return”.

“No one gets to destabilise the state,” Gueye added.