Should Africa draw a line under colonial crimes and move on? 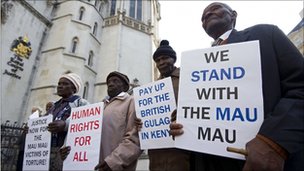 Four Kenyans are suing the UK government for alleged human rights abuses during the colonial era.

The Mau Mau rebellion in 1950's was a violent campaign against white settlers and historians believe it helped Kenya achieve independence. But the uprising was crushed by the British colonial government. In the process, thousands of guerrilla suspects were detained in camps, tortured, starved, and even castrated.

The British government says too much time has elapsed since the alleged abuses and that it cannot be held liable.

But another former colonial power in Africa, Italy, has apologised and compensated Libya for abuses committed during colonial times.

Does Britain have a point or do you back Italy's decision? Is it time to draw a line under colonial crimes and move on, or would that be a denial of justice?