Religion, Spirit and Self Empowerment

A snake-handling pastor who appeared on US TV show Snake Salvation has died after being bitten by a rattlesnake.

Jamie Coots was holding the snake at his church in Middlesboro, Kentucky, when he was bitten on the hand, according to fellow preacher Cody Winn.

The Middlesboro Police Department said Coots refused to have medical treatment for the bite.

Coots said last year that he needed the snakes for religious reasons, citing a Bible passage in Mark’s gospel.

The handlers’ religious conviction is based on a passage in Mark’s gospel which reads: “They shall take up serpents; and if they drink any deadly thing, it shall not hurt them; they shall lay hands on the sick, and they shall recover.”

National Geographic said in a statement that it was struck by Coots’ “devout religious convictions despite the health and legal peril he often faced”. 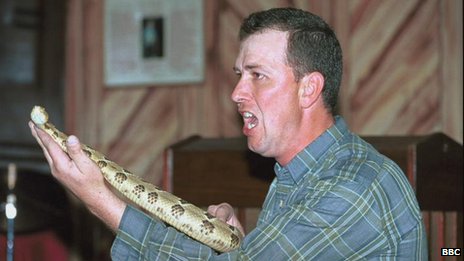 Timber rattlesnakes and copperheads are freely handled at such services

A police statement said that when an ambulance arrived at the Full Gospel Tabernacle in Jesus Name church on Saturday evening, staff were told Coots had gone home.

Coots was contacted at his house but refused to have any treatment. Emergency workers returned later in the evening, by which time Coots had died.

Mr Winn said that after the bite in church, Coots dropped the snake but then picked it up again.

“He had one of the rattlers in his hand,” he told a local news station. “It just turned its head and bit him in the back of the hand… within a second.”

Coots’ son, also named Cody, said his father had been bitten eight times before but had never had such a severe reaction. He said the family thought he would recover as he had on previous occasions.

“That’s what happened every other time, except this time was just so quick and it was crazy.”

Coots subsequently pleaded guilty to illegal wildlife possession and was given one year of unsupervised probation.

In 1995 28-year-old Melinda Brown, of Parrottsville, Tennessee, died after being bitten by a timber rattlesnake at Coots’ church.