It’s only days into the new year, and Nigeria is yet again profiled negatively on the international scene. This time because of the men of the PC, often called “Yahoo Yahoo Boys”. For the JJCs, they are internet fraudsters.

I happened to stumble on her article by The New York Times just published, profiling the Nigerian Internet Scam {Click to Read}.

The editor Daniel Engber wastes no time in getting to the origin of the online scamming business from the “Giants of Africa”, as well as revealing how Ibrahim Babangida‘s tenure as President of the Federal Republic of Nigeria heightened the issue. 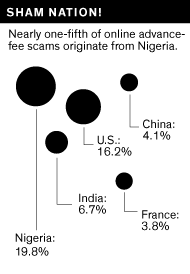 The Nigerian scam may seem like a scourge of the Internet age, but it actually predates email. Before we started getting all-caps proposals in our inboxes, con men in West Africa plied their trade by fax and paper letter. Some of the first scams to make their way to Western Europe arrived by telex in 1989 and 1990, when businessmen in Britain started hearing that a wayward tanker of Nigerian crude could have its cargo claimed for bargain prices — in exchange, of course, for some cash upfront. Before then, Nigerian fraudsters aimed their grifts at locals. One scheme was the “wash-wash,” a literal money-laundering in which the mark is shown a valise of supposed bills blackened with Vaseline and iodine and promised a cut if he pays for an expensive cleaning agent.

Advance-fee or 419 scams, known by the section of the Nigerian criminal code that outlaws fraud, took on a global character when oil prices crashed along with the national economy. A newly installed military ruler, Ibrahim Babangida, cut salaries for civil servants and the military and ended price supports for the local currency. Within three years, the country’s inflation rate was greater than 38 percent. The English-speaking, entrepreneurial class found itself with little buying power and in need of foreign money. “Some of these guys came out and started perpetrating fraud,” says Andrew Apter, an Africa historian at U.C.L.A. “They used the language and insignias and letterhead of financial offices to lure people in.”

Apter has traced this sort of misuse of official iconography as far back as a century. When Nigeria was established as a colony under British rule in 1914, its first governor cracked down on scammers in fake uniforms who claimed to be collecting taxes on behalf of the empire. The advance-fee scam itself — whereby payments are extracted from a sucker who hopes to gain an enormous treasure — seems to have originated elsewhere. According to Robert Whitaker, a historian at the University of Texas, an earlier version of the con, known as the Spanish Swindle or the Spanish Prisoner trick, plagued Britain throughout the 19th century.

These days, an address in Lagos would seem to be a red flag for prospective dupes, but it may be helpful for some scammers. In 2012, a researcher with Microsoft named Cormac Herley tried to model the con artist’s behavior and concluded that a clear tip-off — an email address in Nigeria, for example — could, by scaring off the savvier or more suspicious sorts, enable them to focus on the most gullible victims.

In 2003, Mike Berry was a 41-year-old computer engineer in Manchester, England, when he started replying to Nigerian scammers over email for fun. His website, 419eater.com, provides a forum for likeminded “scam-baiters” and an archive of their most outrageous achievements.

After 10 years, are you still an active scam-baiter? I dabbled about five or six months ago — I like to keep my hand in. But in my heyday, it wasn’t unusual for me to have 15 or 30 scammers on the line at the same time. I’ve dealt with about 4,000 or 5,000 scammers since I started.

It sounds like a full-time job. It’s not really that tricky, if you’re good at accounting for where everything’s going. You’ll find a lot of scammers will twig straightaway and drop you like a hot cake. . . . You may only get 10 percent who will stick with you for a decent period of time.

So that’s your success rate — 10 percent? That’s for what we could call a decent success, either a long period of time keeping the guy busy, or what we would call a trophy. You know, like a funny picture, carvings, things like that.

It sounds as if you’re even better at this than they are. I’d be able to do a really good job, I think. I haven’t for one second contemplated doing that, of course. . . . I do remember I sent a scammer a fake passport, and it was such a good fake that at the end of the scam-bait, when he realized what had happened, he sent me an email and basically admitted to everything he was trying. He said that he was quite a high-up scammer, and he offered me a deal. He would pay me $12,000 a month for 10 passports to be created. You’ve got to think of what this guy must have been earning to offer me that kind of money!