A woman has been crushed to death and at least eight other people have been injured, two critically, at a nightclub in Northampton.

Nabila Nanfuka, 22, of Neasden, north-west London, died in Lava and Ignite in St Peter's Street in the early hours.

One witness, James Adetula, 21, said a "stampede" had begun as people made for the exits when they were told that their buses were leaving.

The number of people in the club is unknown and is under investigation.

Supt Andy Cox, of Northamptonshire Police, said they were aware of large numbers of people at the 1,600-capacity venue.

Officers are also looking at whether the club's fire alarm was activated before the crush, he told a press conference.

Ms Nanfuka was studying leisure and tourism at the University of Northampton.

Her family described her as "one in a million" and a "beautiful person".

The event, called DNA Presents Wickedest Wickedest, started at 21:00 BST on Tuesday and was due to go on until 04:00 BST on Wednesday. Emergency services were called to the scene at 03:37 BST.

Mr Adetula, who said he was a friend of Ms Nanfuka, told the BBC: "It was a uni night and they had come from all over. It was so busy that some had to go to another club nearby."

He said there was an announcement that signalled the end of the night, which forced club-goers towards the exits.

He said: "It was 'everybody the coaches are leaving, make your way to the exits' so everyone went for the exits.

"Then next minute the fire alarm went off and everyone started panicking. 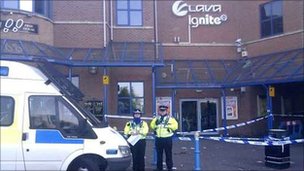 "There was obviously a stampede of people in there when the fire alarm went off."

A spokesman for Lava Ignite said: "The club management and staff are co-operating fully with the local police to find out exactly what happened.

"Our thoughts are with the family of those involved."

Councillor David Palethorpe, leader of Northampton Borough Council, said: "This is a terrible tragedy and we have the deepest sympathy for the families of everyone involved.

"As the licensing authority, we will of course play our part to support the police investigation in every way we can."

Brian Binley, Conservative MP for Northampton South, said his reaction to the news was "one of horror, as I imagine many people will react, one of great sadness for the loss of a young life and for injury to other young people".

He added: "I am calling for a full and open public inquiry so that we can find out exactly what happened. I would hope that inquiry could make recommendations… that would make these places safer for young people."