United Kingdom, Denmark and Netherlands have agreed to give asylum to more than 5000 Ugandan gays and Lesbians to protect from being prosecuted

The Western world have come out protesting and condemning the new ‘abhorrent’ Uganda law criminalizing homosexuality. Norway, the Netherlands and Denmark said they would withhold aid to the Ugandan government in protest against the “draconian law.”.

In signing the bill, Museveni said the measure is needed because the West is promoting homosexuality in Africa, and he rejected international criticism of the law as interference in Uganda’s internal affairs. 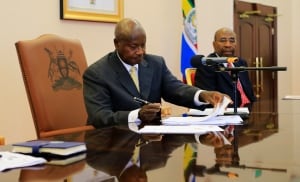 Ugandan police spokesman Patrick Onyango said Tuesday that no gays have been arrested since Museveni signed the bill but that at least two had been taken into custody since lawmakers passed the measure in December.

Onziema said that he had counted up to six arrests and that more than a dozen gay Ugandans had fled the country since December.

Homosexuality has long been criminalized in Uganda under a colonial-era law that outlawed sex acts “against the order of nature.”

Some Ugandan lawyers and activists have said they will challenge the new law as unconstitutional and impossible to implement.

The Ugandan law came just over a month after Nigeria passed a similar measure.

The Gaytimes magazine has listed contacts and organisations that are trying to help Ugandan gays free Uganda.